You might remember the coffee trend that took the world by storm at the beginning of the pandemic. Yes, we’re talking about the dalgona coffee trend. From its innovative idea to huge celebrities and influencers becoming involved, everything contributed to making the trend bigger than anything we could have ever dreamed of. While the trend has since subdued a little, there is no doubt about it, dalgona coffee stands strong in the hearts of coffee lovers, both new and old. If you’re searching for the history, and the benefits and drawbacks of dalgona coffee, you’re in the right place. Here’s all about dalgona coffee you need to know.

What Is Dalgona Coffee?

Dalgona coffee is made from whipping coffee and sugar together until the mixture becomes light and fluffy, and the color of the coffee turns light brown. Milk is heated/chilled separately and the whipped coffee mixture is added on top. The coffee is mixed before it is consumed, but before that, the gradient of the light brown whipped coffee, to the white milk, is what has hooked so many people over the globe.

The name “Dalgona” comes from South Korea, where the word means “it’s sweet”. Dalgona is also a honeycomb candy sold by street vendors in Korea. The candy tastes sweet initially and then has a bitter note in the end. The candy is sold in street stalls around South Korea, with shapes carved in the middle. The goal is to eat the candy from the sides, without messing the image in the middle. When the coffee was named the dalgona coffee because it was sweet like the candy, it brought back childhood memories for most Koreans, and this is one of the reasons for its immense popularity. 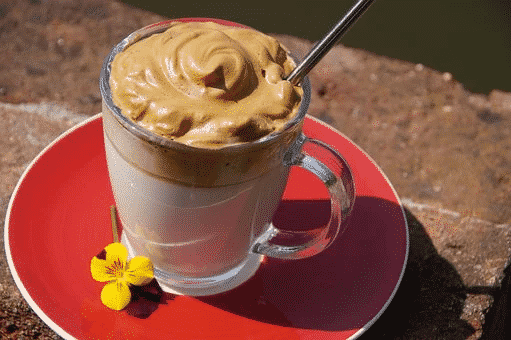 The Birth of the Dalgona Coffee Trend

The dalgona coffee trend hit TikTok at the beginning of the pandemic, and instantly people were hooked. With quarantine giving everybody a lot of time, the dalgona coffee trend was seen as the perfect activity for bonding and a little bit of fun. The homemade coffee presented quite the picture, and everybody was excited to pass some time and make it themselves. However, where did the dalgona coffee trend first start? Well, the answer is South Korea. Dalgona coffee had been in Busan for a long time, but it found the spotlight when Korean actor Jung Il-woo consumed the coffee in a Mukbang on the show “Stars’ Top Recipe at Fun-Staurant.”

Instantly, the Korean audience was hooked, and people took to TikTok to share their renditions of the recipe. The account @imhannahcho was one of the first, if not the first account to make her version of the recipe on TikTok. Her video got about 2 million likes. Soon, people all over the world joined in, and the #dalgonacoffeechallenge hashtag on TikTok got more than 17 million views.  Even huge celebrities like BTS took to TikTok to post videos of themselves making the coffee. The coffee trend just kept spreading and spreading.

The dalgona coffee trend was the very thing the world needed during the grim quarantine. It was fun, it was a way to bond with your loved ones, and most importantly, it was an activity you could do from the confines of your home.

The History of Dalgona Coffee

Although the world has only now found dalgona coffee, this drink has been around for decades. Here’s everything you need to know about dalgona coffee.

The dalgona candy has been in Busan since the 1960s, however, the coffee of the same name recently gained popularity in Korea. The Indian subcontinent, on the other hand, has been coffee the same way for decades. Indians, Pakistanis, Bangladesh, and other people in the region have all made whipped coffee the same way. This is why dalgona coffee was called Desi coffee, or Desi Cappucino far earlier than it was called “Dalgona”.

However, in the Indian Subcontinent, the coffee mixture is not typically layered on the milk, and instead, the milk is poured into the mixture. Other variations of the same whipped coffee are found in Greece, Libya, Cuba, and a lot of other countries around the world. The coffee may have been made famous by South Korea, but it has long existed in the hearts of coffee lovers, and different cultures around the world.

The coffee has no lack of scandals of its own either. A US-based company was hit with a lot of heat after they claimed they had made a drink very similar to the dalgona coffee. The people were not pleased, and there was a lot of uproar about cultural appropriation. 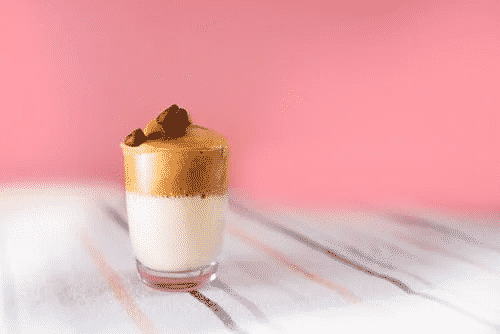 The Only Dalgona Coffee Easy Recipe You Need

Add your instant coffee and sugar to a cup or other narrow container, and add the water on top. Then whip the coffee using either a fork with your hand or with a manual or automatic whisk. Keep whipping the coffee until it doubles in size, and turns light in color. This will take about 8 to 12 minutes of whipping by hand.

Benefits and Drawbacks of Dalgona Coffee

The Coffee Needs No Machine or Equipment

Unlike cappuccinos and lattes, which need some sort of other equipment for making, dalgona coffee can be made by hand, using a fork and nothing else.

Unlike other types of coffee, dalgona has very little coffee. One of the other dalgona coffee benefits is that you can cut down on the coffee content even more if you want to. Dalgona coffee offers you the flexibility to switch the recipe as you please.

Provides a Boost of Energy

Dalgona coffee is made from instant coffee, which has quite a considerable caffeine content. This caffeine helps you stay energetic throughout the day. High caffeine content does not mean the coffee lacks any other benefits of normal coffee like antioxidants, which is one of the best dalgona coffee benefits. 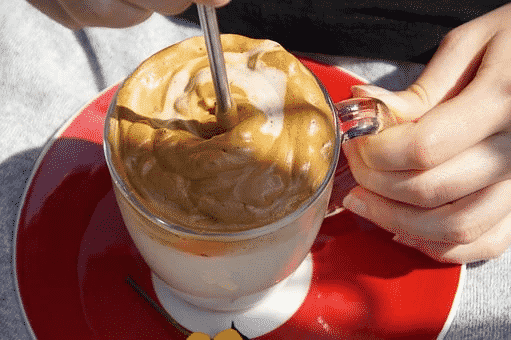 You Can Make the Drink Vegan and Keto Friendly

It is very easier to switch the milk with substitutes like oat milk and almond milk. You can also switch the sugar to coconut sugar which has a lower glycaemic index.

It Is a Healthier Option to Café Drinks

Anything you make at home is always better than anything you buy in the stores. This is because you have control of what goes inside your coffee, and how much of everything you add. Since dalgona coffee is homemade, you can control the amount of sugar and instant coffee you put in the drink, making it healthier when compared to any other café option.

Milk absorbs the acid in the stomach, stops acid formation in the body, and so protects you from any burning sensation and acid reflux. The calcium and protein in the milk are also said to prevent heartburns. So the more milk you make your dalgona coffee with, the more beneficial it is against acidity. Take care though, the ratio of whipped coffee to milk is of immense importance. You should make your dalgona coffee with very little whipped coffee, and a lot of milk. This is because caffeine can cause the release of acid in the stomach, thus having an adverse effect than that intended.

Anxiety and Depression have become a global illness, and more than half of the entire population is suffering from these disorders. Dalgona coffee can help you improve your mood and prevent depression in people. According to Healthline.com, caffeine was found to reduce the risk of depression in people, however, there was no relation between low depression and other caffeinated drinks.

Coffee was also linked to lower rates of suicide. In contrast, coffee can cause an increase in the risk of depression in teenagers and children because it affects the quality of sleep.You can read more about the benefits of drinking coffee every day here- 9 Proven Reasons Why You Should Drink Coffee Daily

Caffeine in coffee helps boost metabolism because it is one of the best psychoactive substances in the world. Since caffeine boosts metabolism, the fat in the body is burned faster. Coffee also mobilizes fat in the tissues, which helps you slim down. According to Healthline.com, coffee has 4 primary stimulants, caffeine, Theobromine, Theophylline, and Chlorogenic acid. All of these affect metabolism.

Magnesium and Potassium in coffee also help regulate blood sugar levels in the body. Coffee also helps reduce the cravings for other dishes that have high sugar content.

Dalgona Coffee Has a Lot of Calories

Dalgona Coffee Can Be Bitter

Instant coffee is very strong, and since about 2 tablespoons of instant coffee are used to make a cup of dalgona coffee, the coffee can be very bitter. Most people like the taste of the coffee, because they believe the sweetness of the milk is complimented perfectly by the bitterness of the coffee. For others though, the taste can be a little too bold.

Dalgona Affects the Quality of Sleep

Caffeine in coffee can lead to insomnia, which can seriously affect your physical and mental wellbeing. To avoid this, we recommend you drink coffee 4 to 5 hours before sleep. This will allow the coffee to work itself out of your system before you settle down for bed. You shouldn’t drink more than 4 cups of coffee or 400 mg of caffeine in a day. This should be even lower if you are caffeine intolerant. 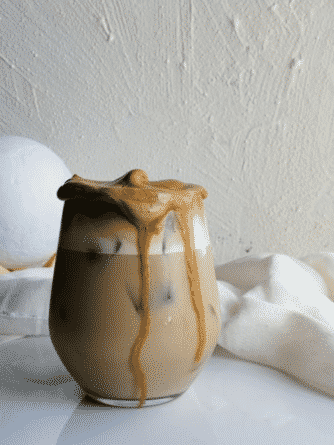 Dalgona Coffee Can Be Dangerous for People With High Cholesterol Levels

Dalgona coffee is a very interesting way to have your coffee, especially if you’re someone that appreciates the experience more than saving time. The coffee is time taking to make, however, the process can be stress relieving. The best part is that even though dalgona coffee is bitter, you can easily adjust the coffee content and make it milder. The coffee truly does cater to everybody’s taste. Add in the lack of equipment required, and the dalgona coffee method may very well be the easiest and most versatile coffee-making method out there. After all, there must be a reason the Indians have been drinking this for decades.

What Is a Flat White Coffee?

How To Make Mocha at Home